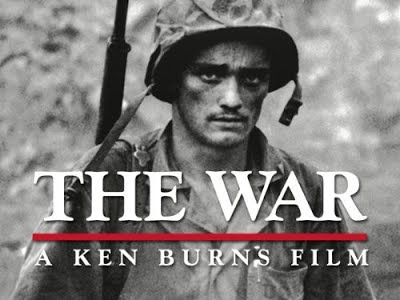 He told me it was a documentary about World War II. We’re both kind of history buffs and I especially was always drawn to World War II. I always consider that one of the biggest wars in our history. So when my husband mentioned the documentary I was intrigued. I knew I would need to set aside time to watch it, because it was a seven episode series and each episode is at least an hour or more. It was a great undertaking but, as I said, I was intrigued. I thought, how could you spend so much time on one war?

What I didn’t realize is that the documentary only covered the stories of those from a handful of towns in America. Imagine how much time the documentary would require to cover World War II stories from every city in America, because you know that every city experienced the war. Every city had to make sacrifices, including their loved ones going off to fight. I watched every episode learned every name and story. I liked the structure of the series, in that it started at the beginning of the war, introduced you to individuals and families that experienced it and at the end you get a conclusion for each person you learned about.

The series was filled with photographs and video showing combat, Americans at home, and Americans  who were POWs. It really is an interesting series and worth the time to watch. If you’re a history fan or love the documentaries, I think you will really love this series. Right now all seven episodes are streaming on Netflix.